by The Welcome Wagon 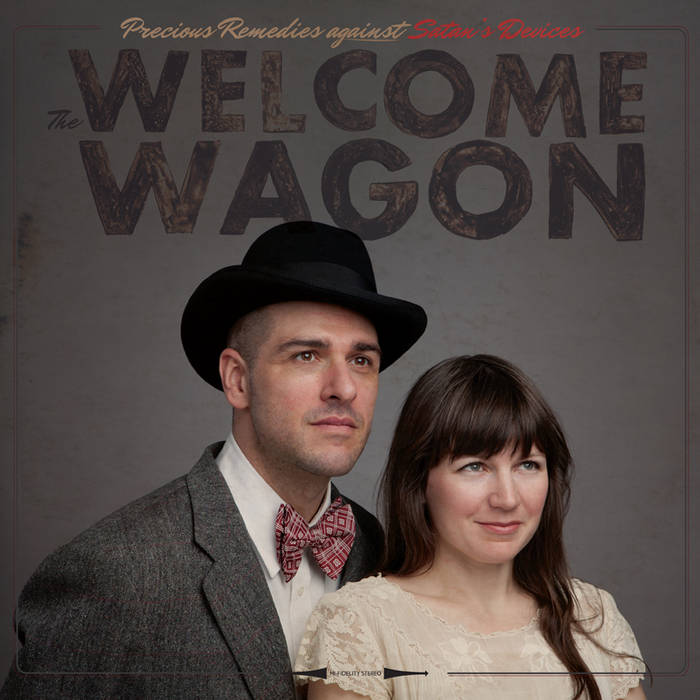 Jamison Barsotti The best reason to listen to this album is if you need a smile.

Kent Reeder Every song on this record is creative and fantastic. Their new melody for "The Strife is O'er" is inspired and great for congregations. Favorite track: The Strife Is O'er.

As the twelfth year of the twenty-first century dawned, the economy was still in the tank, jobs were still scarce, health care was still a mess, and White House hopefuls were bickering and backbiting like there was no tomorrow. People were sick and tired of it all; heck, everyone was sick and tired, period.

The masses needed some good medicine, something a lot like Precious Remedies Against Satan’s Devices. Not the 17th century Puritan classic by Thomas Brooks – though that book’s a fine place to start – but the new album of the same name by The Welcome Wagon, the musical duo of Vito and Monique Aiuto, a Presbyterian pastor and his wife. The couple seeks solace in song – for themselves, their congregation, and their listeners. The 13 tracks on Precious Remedies provide a much-needed healing balm, very much like the one Brooks describes in the preface to his old devotional: “A special salve for every spiritual sore, a special remedy against every spiritual malady, a special plaster against every spiritual wound. Food to nourish you, a staff to support you, a guide to lead you, a fire to warm you, and springs of life to cheer and refresh you.”

If a book can promise all that, can an album too? Vito and Monique think so.

“We’ve always thought of our music as a gift from God – to us, to the people we make it with, and to anybody who listens and enjoys it,” says Vito. “It’s always had this spiritual aspect to it, and for this album, we think of it as music that serves as spiritual medicine.”

It’s an apt sequel to their critically acclaimed 2008 debut, Welcome to the Welcome Wagon. Here, Vito and Monique simply throw those welcoming arms open wider, inviting the listener to join them for 51 minutes of church. Precious Remedies begins by telling it like it is: “I’m not fine / And you’re not fine / And we’re not fine together,” they proclaim before easing into the chorus of “Lamb of God, you take away the sin . . .”

And with that opening confessional, church is in session.

Vito explains: “This album has a somewhat liturgical structure, ordered loosely like a worship service. It begins with the existential and cosmic dread of ‘I’m Not Fine,’ immediately followed by ‘My God, My God, Parts 1 & 2,’ a prayer that rails against God’s seeming absence from this world and our lives. The words are adapted from the prayer of Jesus while he hung on the cross.

“It continues with the assurance of redemption (‘I Know That My Redeemer Lives’), which then extends to friendship with God and with one another (‘Rice & Beans,’ ‘High’).”

About those last two titles . . . “Rice & Beans (But No Beans)” is a whimsical ditty about how community helps us thrive in difficult circumstances: “Phone cut off, worn through shoes / Check may bounce, rent come due / At the end of the day I’m glad to have a friend like you.” And then there’s “High,” a 1992 classic from The Cure. Vito sings it mostly as a love song to Monique – “When I see you take the same sweet steps you used to take / I know I’ll keep on holding you” – but says “it could be any kind of love or friendship. It’s a key part of who we are and what we do in our church service. After the confession of sin, we say the assurance of pardon: ‘Because we’ve been reconciled to God through Jesus Christ, we can also be reconciled to one another. The peace of the Lord be with you. Greet those around you with the sign of Christ’s peace.’ I think of this part of the record as an affirmation of the ability to love – your husband or your wife or your friend or whatever, because you’ve been reconciled to God in Christ.”

Still, we need a “Remedy” – here, a cover of a 2007 David Crowder song of the same name (“The broken and used / Mistreated, abused . . . / He is the remedy.”) And “Would You Come & See Me in New York?” is a tribute to Vito’s late father – and to “any people you wish could be with you, even people you might never see again in this life. There’s a certain sadness to it.” Ditto “My Best Days, Parts 1 & 2,” which acknowledges life’s struggles, culling its lyrics from John Donne’s “Holy Sonnet 19” (“Those are my best days / When I shake with fear”).

Ah, but then an explosion of celebration, as the album rolls into a string of tracks bursting with hope, joy, and resurrection: “Lo, He Comes with Clouds Descending” (adapted from several 18th century writers, including Charles Wesley), “Draw Nigh & Take the Body of the Lord” (from a late 7th century manuscript by Irish monks), and “The Strife Is O’er” (from a 17th century German Jesuit collection). And then, as any proper church service does, it ends with a benediction and a postlude, respectively: “God Be with You Until We Meet Again” and “Nature’s Goodnight,” the latter which Vito calls “a quiet snapshot of what this music sounds like when it is being born in the Aiutos’ home.”

Vito says his songwriting is informed by his work as senior pastor at Resurrection Presbyterian Church in Brooklyn’s Williamsburg neighborhood. “A pastor is supposed to care for people, to help them to love God, to engage with their lives and their joys and their sorrows,” he says. “I’m only interested in writing music that will speak to that. I’m writing as a pastor, wanting these songs to speak God’s truth into those situations.”

Those who enjoyed the Welcome Wagon’s debut album will notice their distinct sound again here – loose, jangly, comfortable, a gathering of friends making music together. It’s at times jaunty and toe-tapping, at others quietly contemplative, an alt-folk gem that sounds very much like it comes out of the Asthmatic Kitty camp. But while the first album was recorded over the course of eight years in various venues, this one was done in five days at the library of an old rectory in Brooklyn. And while recording artist and AK co-owner Sufjan Stevens produced WW’s first album, he’s less noticeable on this collection, produced by Alexander Foote, who also plays guitars, organ, autoharp, percussion, and some piano. (Stevens does play banjo and piano and sings in the choir on several songs here.)

The rectory library at St. Andrew’s House – where Stevens has also recorded some of his own music – was a striking and acoustically apt place to make an album. “It’s a place we love,” says Vito, “and it’s also really gorgeous.” But they recorded it in mid-August, when the cicadas were having a raucous field day throughout New York, perched on the trees right outside the windows – and screaming their 120-decibel songs all day long. “It actually became a serious problem,” says Vito. “They’re almost distractingly loud, even on the finished project; you can especially hear them in the first 30 seconds of ‘High.’ But we just thought, Well, we’re here. We have a week to do this. We don’t have everything we want, but let’s just embrace the limitations. Besides, these songs have been banging around in my head for years, and I just wanted them out.”

You’ll be glad he did. Precious Remedies for everyone.

The Welcome Wagon is a married couple, the Reverend Thomas Vito Aiuto and his wife Monique, who execute a genre of gospel music that is refreshingly plain. Their hymns are modest and melodic takes on a vast history of sacred song traditions, delivered with the simple desire to know their Maker—and to know each other—more intimately. ... more